​See polar bears in their summer environment and get up close to beluga whales on this thrilling wildlife adventure. Begin in Winnipeg with a visit to the Assiniboine Conservation Centre for a unique opportunity to see rescued polar bears through underwater viewing tunnels, before flying on to Churchill, known as the ‘polar bear capital of the world’, where you can see these majestic animals hunting along the shores of Hudson Bay. Explore the city of Churchill with highlights including the ‘polar bear jail’ and the Cape Merry Historic Site, before enjoying a welcome ‘Arctic Feast’. Next, embark on a cruise to spot Beluga whales that gather near the estuary of the Churchill River, before continuing onto Hudson Bay where another cruise awaits to discover the remote habitats of Western Hudson, where polar bears can be seen in their summer guise. 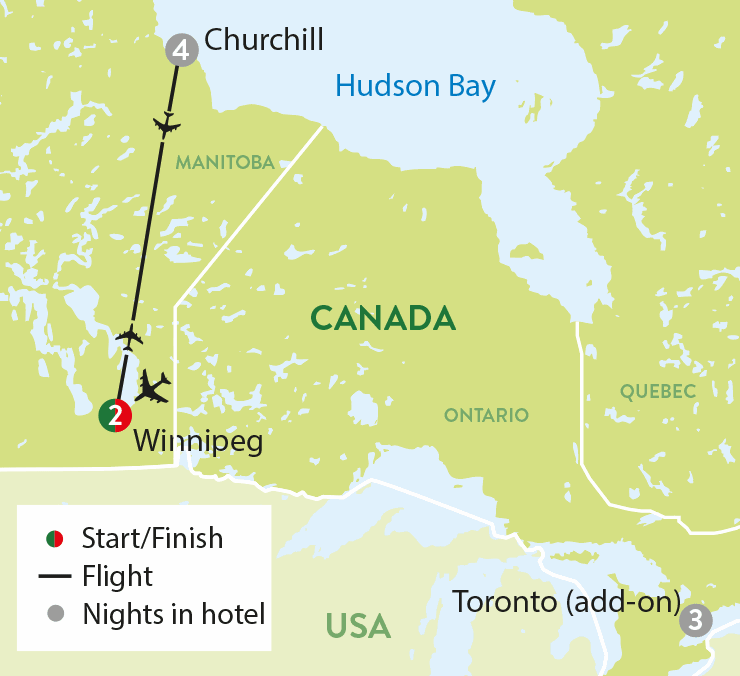 Depart on your scheduled flights to Winnipeg today. On arrival we'll transfer you to your overnight hotel.

The thrills begin early today, at the Assiniboine Park Conservancy, home of the Polar Bear Conservation Centre. Here you're going to have the unique opportunity to watch rescued polar bears through underwater viewing tunnels.
After this we're going to fly to Churchill, known as the 'Polar Bear Capital of the World', where our accommodation is the family-run Lazy Bear Lodge. Summer is a great time to see wildlife in this part of the world. More than 3,500 beluga whales gather annually near the estuary of the Churchill River, and polar bears come to hunt along the shores of Hudson Bay. During your stay, Specialist Local Guides will take you to the best places to look for other creatures that inhabit the summer subarctic including birds, seals, Arctic hare and Arctic fox.
Your adventure starts on a culture and heritage tour of Churchill, a town inaccessible by road. If polar bears stray too close here, they are humanely captured and 'jailed' until they can be safely released back into the wild. Our tour passes the Polar Bear Jail and we'll visit the Cape Merry National Historic Site, to view the remains of a defensive battery. After settling in, this evening we'll
get together for a welcome 'Arctic Feast' including delicacies such as char, caribou and musk ox.

A full day of Arctic exploration starts with a cruise. Hundreds of beluga whales come to this area to feed, mate and give birth in the warm, shallow waters, so keep your eyes peeled for a sighting. We'll also step ashore to see the partially-restored Prince of Wales Fort, a massive stone outpost that dates back to the 1700s.
In the afternoon we'll board an all-terrain tundra vehicle, designed to have minimal impact on the environment whilst offering excellent chances of getting close to wildlife.​

Our Arctic adventure continues today as we board coastal explorer vessel the Sam Hearne, to discover some of the more remote habitats of Western Hudson Bay. You can disembark to walk on the tundra in search of bears in their lesser-known summer guise. We'll hope for sightings of these mesmerising creatures lounging in the sun and cooling off in the sea on the hot days of the brief northern summer. Back on board, keep a lookout for beluga whales and other Arctic wildlife.​

You've a day to explore Churchill at leisure. If you're feeling adventurous, there's the once-in-a-lifetime chance to kayak amongst beluga whales on our optional excursion. We'll get together for dinner this evening to share stories of our wildlife experiences.​

After the excitement of the last few days, a relaxed morning might be just what you need. This afternoon we'll fly back to Winnipeg for an overnight stay. Tonight you are invited to a farewell dinner at Fort Gibraltar, built in the early 19th century when fur trading was the main industry of Western Canada. Its history is linked with the fierce competition between the English Hudson Bay Company and the North West Company, based in Montreal.

Maybe you'll choose to head to Winnipeg's historic Forks area this morning, where there are many attractions. The Canadian Museum for Human Rights comes highly recommended, and in the French Quarter you'll be spoilt for choice if you fancy a spot of lunch.
This afternoon we'll transfer you to the airport for your flight back to the UK.​

​You'll arrive back in the UK today.

Inn at The Forks

Located in Downtown Winnipeg, the boutique Inn at the Forks is situated next to Winnipeg's leading tourist attraction, The Forks. The recently renovated Riverside Spa offers a great place to relax, while the perfect location offers a great opportunity to explore the surrounding area. Room facilities include; complimentary WiFi and a 37 inch flat screen TV.
Next accommodation

The Lazy Bear Lodge in Churchill is located in the heart of polar bear country. Stay in a handcrafted log building and enjoy exotic local cuisine.

Hotel facilities include a restaurant. Bedrooms have private facilities, TV and Wi-Fi.
Next accommodation

Inn at The Forks

Located in Downtown Winnipeg, the boutique Inn at the Forks is situated next to Winnipeg's leading tourist attraction, The Forks. The recently renovated Riverside Spa offers a great place to relax, while the perfect location offers a great opportunity to explore the surrounding area. Room facilities include; complimentary WiFi and a 37 inch flat screen TV.