These two spectacular regions abound with unique sights on this fantastic Italian holiday. Visit Masseria Centrone, a fortified farm where you can experience a real flavour of the food grown and produced in the Apulian region, including cheeses, olive oil and bread. Explore the UNESCO-listed town of Matera and its 'Sassi' houses, incredible cave dwellings carved into the hillsides. Your holiday continues with a visit to the city of Lecce to uncover treasures such as extravagant Baroque architecture, the ancient Roman amphitheatre and the Church of Santa Croce, before discovering Puglia's unique Trulli houses, whitewashed cylindrical buildings with conical grey roofs that can be seen in large numbers into the Valley of Itria. Optional excursions include visits to the pretty town of Ostuni for a stroll along its maze of narrow streets, and the coastal town of Trani in the north, with its busy harbour and 11th century cathedral. 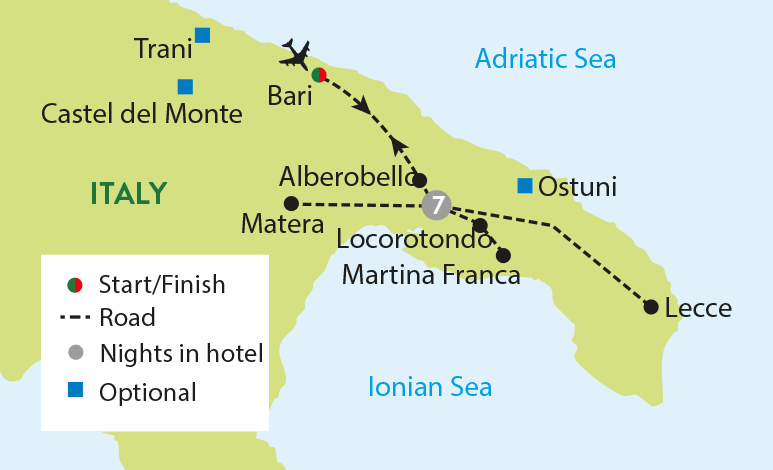 Travelsphere’s Private Chauffeur Service collects you from home for your flight to Bari. On arrival, we will transfer you to the 4-star Hotel la Chiusa di Chietri near Alberobello. This is the ideal base from which to explore the regions of Puglia and Basilicata. It also boasts wonderful features including a lovely spa, beautiful gardens and an outdoor swimming pool. Between your sightseeing you can use these facilities at your leisure.

Today we'll visit Masseria Centrone, a fortified farm that has been in the Centrone family for over 150 years. Here we'll get a chance to experience a real flavour of the food grown and produced in the Apulian region, which includes cheeses, olive oil and bread. The visit will include a chance to watch a demonstration by one of the owners making orecchiette pasta whose shape is typical of the area.  You will also get the chance to get hands on if you wish, making bread rolls, which will be baked in an open wood oven.

The highlight of the visit will be a lunch of typical regional food accompanied by wine and Limoncello. After lunch there will be a chance to explore the gardens.

You've a full day of exploration to look forward to today on a trip to the UNESCO-listed town of Matera. Here, your Local Guide will tell you all about the Sassi houses you'll see – incredible cave dwellings carved into the hillsides. They were inhabited right up until the 1950s and as one of Basilicata's most famous sites, they offer a fascinating window on the past.
During a break in sightseeing your Tour Manager and Local Guide will be able to point you in the right direction if you fancy a spot of lunch.

How you spend today is entirely up to you. If relaxation is on your agenda, why not laze by your hotel's pool, or book yourself into the spa for a treatment or two. If you want to explore at your own pace, there's a shuttle service into Alberobello.
Another alternative is an optional excursion to the pretty town of Ostuni. With your Tour Manager, take a stroll along its maze of narrow streets lined with whitewashed houses which sit beneath an imposing Gothic cathedral.
There's also the chance today to sample the olive oil that is produced in this region in an abundance of olive groves. Some of the trees here are hundreds of years old.

You have a choice to make today. You can spend more time enjoying the facilities at your hotel or maybe head into Alberobello for more sightseeing.

If you would like to see more of the region, an alternative is an optional day of exploration in the coastal town of Trani in the north of Puglia. Here you'll see fishermen at work in the busy harbour and have the chance to admire the simplicity of its 11th century cathedral.

In complete contrast is the grand Castel del Monte, which you'll also visit. This gleaming castle is made from pale stone and can be seen from miles around. As you stand at its base, cast your eyes upwards and take in this octagonal masterpiece which was built in the 13th century by Emperor Frederick II. ​

After breakfast we'll head off to explore the attractive city of Lecce. Together with your knowledgeable Local Guide, you'll uncover a new treasure around every corner as you stroll along streets lined with extravagant Baroque architecture. A couple of real highlights to keep an eye out for are the ancient Roman amphitheatre and the Church of Santa Croce. Spend some time looking closely at its ornate façade, which is adorned with intricately carved statues.​​

You're going to see Puglia's unique and quirky-looking Trulli houses on an included day out. As we drive into the Valley of Itria, these whitewashed cylindrical buildings with conical grey roofs can be seen in large numbers. Our first stop is Alberobello, where you'll see the Trulli are decorated with painted symbols on their roofs. Then, in Locorotondo you'll see the buildings are arranged in a circular pattern.
Finally, we reach Martina Franca, in the heart of the valley, where Moorish influences have created a town of medieval palaces and churches. The houses here are adorned with wrought-iron balconies which might put you more in mind of Andalucia in Spain than Italy.

Transfer to the airport for your return flight to the UK. Upon arrival, your Travelsphere Private Chauffeur Service will be waiting for the journey home..

Superior rooms are available at a supplement for the duration of your stay.

For an even more authentic tast of Puglia, take the opportunity to stay in a converted Trullo house in the grounds of the hotel. Authentic Trullo rooms are available at a supplement for the duration of your stay.

Please speak to a Holiday Advisor for details.

Hotel facilities include a outdoor pool and beautiful gardens. Bedrooms have private facilities, air-conditioning, hairdryer, safe, mini-bar and a TV.