HOLIDAY OF A LIFETIME, EVERY TIME

Your Money is 100% Protected

Japan - Land of the Rising Sun

There are few places on Earth where the contrast between traditional and modern is quite so marked as in Japan and on this holiday you'll discover many of its incredible highlights. Beginning in dazzling Tokyo, you'll go on to admire incredible views of Mount Fuji, see the beautiful Matsumoto Castle and visit the traditional city of Takayama. After riding the famous Bullet Train to Kyoto, you'll spend three nights exploring this charming city before heading to Hiroshima and uncovering its poignant history. Your journey ends in bustling Osaka, where you'll visit Osaka Castle and have some free time for shopping if you wish. 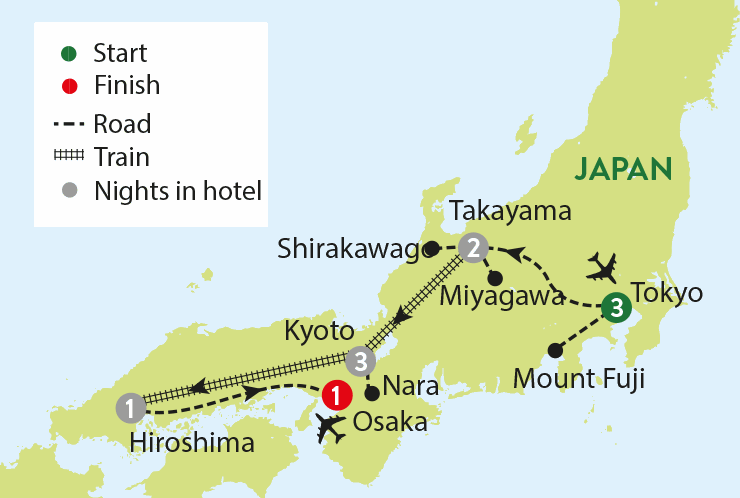 On all flight inclusive holidays, you can now choose to start your holiday with our Private Chauffeur Service* or we can organise free airport parking*. If you'd prefer to make your own arrangements, we'll give you a £100 price reduction* off your holiday. Details on how to book will be included in your confirmation invoice on booking.

Make you own way to the airport or be collected by our Private Chauffeur (if you've pre-booked) for your flight to Tokyo.
Next day

​This evening you'll arrive in Tokyo, where we'll transfer you to your hotel. After time to settle in, why not head out for stroll to get your bearings.

​Your explorations of Japan begin here in dazzling Tokyo and take you first to the Meiji Jingu Shrine. This collection of buildings and tranquil grounds is dedicated to the first emperor of modern Japan. Next we'll transfer to the district of Asakusa, where you'll visit the fascinating Sensoji Buddhist temple, and head to the vibrant Nakamise shopping street.
In the afternoon we're going to visit the Tokyo Tower and make a stop close to the spectacular Imperial Palace. This is the main residence of the Emperor of Japan, so make sure you bring your camera! Tonight we'll head to a restaurant for a welcome dinner.

​A spectacular sight awaits us today, as we journey to Hakone. This is the gateway to Mount Fuji, Japan's highest mountain, and the Fuji-Hakone-Izu National Park. The scenery here is breathtakingly beautiful and we'll take a cable-car ride over the Owakudani Valley to admire views of mountains, sulphur hot springs and crystal-clear Lake Ashi.
The lake formed thousands of years ago in the crater of a dormant volcano, and we'll take a tranquil and scenic cruise across its waters.  At the hot springs, you'll have a chance to try the local delicacy of 'black eggs'. Cooked in the sulphur, eating just one egg is believed to add seven years to your life! We'll also make a photo stop at a great spot close to Mount Fuji, so you can capture its stunning beauty if the weather is on our side.

​Your next base is Takayama, and a day of discoveries starts with a visit to the ancient and perfectly preserved Matsumoto Castle. Set against the stunning backdrop of the Japanese Alps, it's the country's oldest five-tiered wooden castle and has been designated a National Treasure of Japan.
In the afternoon we're going to tour Daio Wasabi Farm to see how Japanese horseradish is grown. The farm has a number of large fields where the wasabi plants grow and we will admire them from specially designed walking trails. To round off your visit, why not treat yourself to a wasabi-flavoured ice cream!

​Our day out today starts early at Miyagawa morning market, where you'll see and even sample the region's exotic fruit and vegetables. We'll then have the chance to see a traditional house and enjoy some free time in Takayama.
One of Japan's most scenic areas is Shirakawago, located along the Shokawa River. We'll head here later to take in wonderful sights of pine-covered mountains and centuries-old thatch-roofed farmhouses.

​A journey by train this morning takes us to Nagoya, where we board one of Japan's famous Bullet Trains bound for Kyoto.  We'll start the sightseeing as soon as we arrive in historic Kyoto. It's filled with fascinating temples, ancient buildings and splendid gardens, and we'll see highlights including Nijo Castle, built in 1603 for the first Shogun of the Edo Period. We'll also admire the Sanjusangendo Temple, the longest wooden building in Japan, which houses 1,001 unique carved statues of Kannon, the Goddess of Mercy.

We'll start the day by viewing the Kinkakuji Temple with its Golden Pavilion. Next we're heading to the beautiful district of Arashiyama today, where a rickshaw ride through a bamboo forest promises to be an exhilarating experience. Sit back and enjoy the sight of the towering stalks swaying gently in the wind and casting shadows on the path. A sushi-making demonstration and lunch are also included before an afternoon of exploration in Nara. This historic city is where we'll find the Todaiji Temple, one of the most famous in Japan, and the Deer Park with its hundreds of free-roaming deer - you can even purchase crackers to feed them. We'll also visit Kasuga Taisha, the most celebrated shrine in Nara.

How you spend today in Kyoto is entirely up to you. You could take part in a Kendo lesson, a modern martial art which uses bamboo swords, or maybe enjoy a more genteel experience, a tea ceremony. Kyoto is the birthplace of this traditional ceremony and there are a number of places which offer you a chance to experience it for yourself.
If you fancy a spot of retail therapy, Downtown Kyoto has plenty to offer, including department stores and a wonderful food market. Alternatively, you could opt to learn more about Japanese culture on a Kimono-wearing experience.​

​We're taking another Bullet Train today, and this time it will transport us to Hiroshima. This city is infamous as the target of the first-ever atomic bomb, dropped by the US at the end of the Second World War.
You'll tour this rebuilt city and nearby Miyajima Island, taking in views of the beautiful Itsukushima Shrine, a UNESCO-listed site built over water. You'll also see the Peace Memorial Park, a vast area of open land dedicated to the promotion of world peace, and the Atomic Bomb Dome. This building stood at the epicentre of the devastating bomb blast and has been preserved as a lasting reminder of that tragic event.
Tonight we'll get together for a farewell dinner. We'll head to a restaurant and try okonomiyaki, savoury pancakes served with a variety of toppings including seafood, vegetables, pork and noodles.

Osaka is the final destination of your tour, and you'll journey here by road, so this morning is all about relaxing and admiring the view from your window. You'll spend the rest of the day discovering Osaka Castle and the Floating Garden Observatory at the top of the Umeda Sky Building.​

Your hotel is located close to the city's main shopping and entertainment district, so there's plenty to keep you busy today. Make your way to the upmarket stores along Midosuji Street, the so-called Champs-Élysées of the East. ​Later, we'll transfer you to the airport for your flight back to the UK.

You'll arrive back in the UK today. Upon arrival, either make your own way home or your Travelsphere Private Chauffeur Service will be waiting for the journey home (if you've pre-booked).

Other hotel amenities include various restaurants serving a variety of Japanese specialities and a lounge bar.
Next accommodation

Guest rooms offer amenities such as a flat screen TV, a refrigerator, and air conditioning, and guests can go online with free wifi offered by the hotel. New Miyako Hotel features a 24 hour front desk, room service, and a concierge to help make your stay more enjoyable. The property also boasts a hot tub and breakfast.
Next accommodation

Other hotel facilities include a selection of restaurants and a bar featuring views of the city.
Next accommodation

Other hotel amenities include various restaurants featuring both international and Japanese cuisines, a tearoom, a top-floor bar with city views and a piano lounge.

Experience even more of your destination by adding one or more optional experiences to your holiday before you set off. Take a look below at the extra trips you can enjoy on this tour 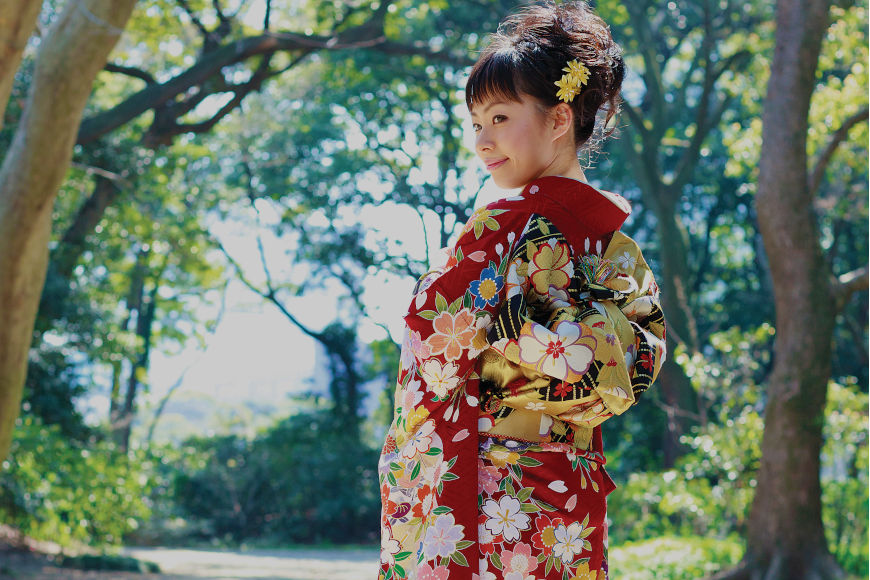 With over 150 fashionable Komon (fine pattern) kimonos for ladies and Yukata for men to choose from you are bound to find a pattern that suits you. You will be dressed by experienced staff and you will be provided with footwear and undergarments, so you can venture out to the Kyoto streets where you can take your own pictures. If you are feeling brave you can also get up on the stage after enjoying the Kimono cat walk show. Hair, makeup and transfers are not included.

With over 150 fashionable Komon (fine pattern) kimonos for ladies and Yukata for men to choose from you are bound to find a pattern that suits you. You will be dressed by experienc...

Prices shown are based on twin occupancy of a double or twin bedded room with private facilities unless otherwise stated. Single occupancy supplements will apply. Travelsphere have made every effort to ensure the accuracy of the hotel images provided on this website and images of room types displayed may vary to those offered on your tour. Therefore due to the possibility of inadvertent errors we do not guarantee their accuracy. Accommodation, airlines used and flight times are subject to change and will be confirmed in your final documents.