HOLIDAY OF A LIFETIME, EVERY TIME

Your Money is 100% Protected

This round trip from Bulgaria's bustling capital, Sofia, will introduce you to many wonderful sites which tell the story of the country's rich history. Discover Plovdiv's Roman amphitheatre, dating back to the 2nd century AD, then continue to the incredible city of Nessebar. UNESCO-listed and home to many ancient churches, it is a delight to explore. There's time to relax on the beach in Varna, while at Madara you can admire an extraordinary medieval rock relief. Watch artisans at work in an open-air ethnographic museum and journey through a scenic mountain pass to learn how Bulgaria's famous rose oil is produced and discover Kazanlak's Thracian tomb. 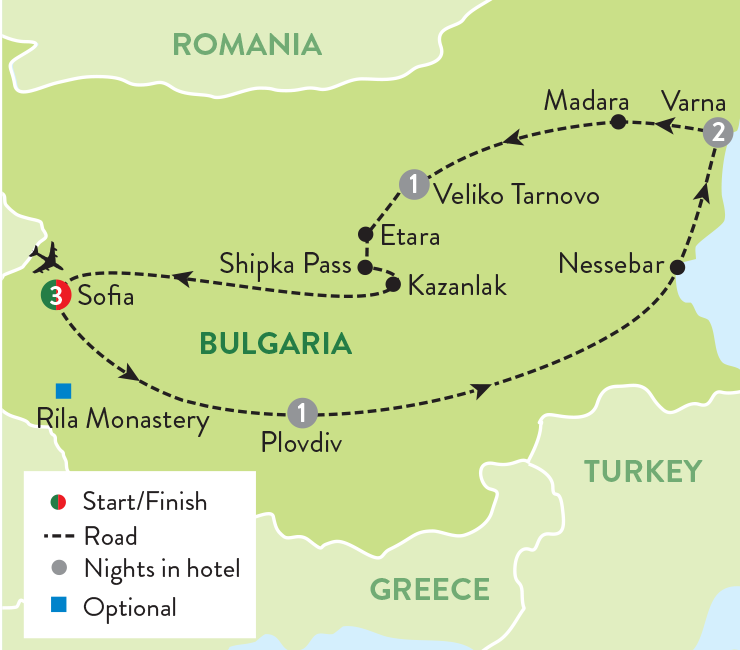 On all flight inclusive holidays, you can now choose to start your holiday with our Private Chauffeur Service* or we can organise free airport parking*. If you'd prefer to make your own arrangements, we'll give you a price reduction* off your holiday. Details on how to book will be included in your confirmation invoice on booking.

Make you own way to the airport or be collected by our Private Chauffeur (if you've pre-booked) for your flight to Sofia today, after which we'll transfer you to your hotel. This evening we'll enjoy dinner together.

​Join your Tour Manager for a walking tour of Sofia. As you explore you'll discover highlights including onion-domed churches, Ottoman mosques and many of the country's finest museums and galleries.
This afternoon, why not join us for an optional excursion to the Rila Monastery. Founded by a hermit monk in around 927 AD, it's the largest monastery in Bulgaria. An architectural masterpiece, beautiful frescoes adorn the walls and ceiling of the main church and a museum tells the story of its history.  ​

​Today you're going to explore Plovdiv, the second-largest city in Bulgaria. Situated at the crossroads between Europe and the Middle East, Plovdiv is a cosmopolitan place with architectural landmarks dating back to the Thracian, Roman and Ottoman eras. You'll discover the Old Town and see its 2nd century Roman amphitheatre, which was uncovered during a landslide in 1972.
Once you have your bearings, the rest of the day is yours to do as you please.​

After breakfast, we'll make our way to Nessebar. This UNESCO-listed city is situated on a rocky peninsula jutting out into the Black Sea and is connected to the mainland by a narrow causeway. Here you'll find remains of Roman and medieval walls and cobblestone streets lined with houses built in Bulgarian National Revival style. The city is renowned for its many ancient churches built during different periods of history. Each has a tale to tell, from the Church of St John the Baptist with its cylindrical dome to St Stephen's Church and its 16th century frescoes. Our tour also takes in the archaeological museum, where exhibits chart Nessebar's fascinating history.
Later we'll drive to Varna and dinner this evening will be served at a traditional restaurant and wine cellar.

After a busy few days, today has been left free for you to relax on Varna's sandy beach. Alternatively, you can join our optional sightseeing tour of Varna. It begins at the Cathedral, then takes you to the archaeological museum, where thousands of exhibits found in Varna and the surrounding area are housed. Some of the artefacts date back to the region's prehistoric settlements and they include the oldest gold treasure in the world. We will see the well-preserved remains of the Roman thermal baths and the beautiful Sea Garden, a large landscaped park running parallel to the coastline. There will also be time to stroll through Varna's streets lined with historic buildings, shops and cosy cafés​.

You're heading to Veliko Tarnovo, a town in the Balkan Mountains, and on the way, you'll pack in plenty of sightseeing. Your first stop is Madara, where you'll see the impressive Madara Horseman. This early medieval rock relief is carved into a plateau and depicts a horseman trailed by a running dog, with a lion crushed beneath the horse's hooves. The sculpture was created in the 7th century more than 20 metres up a 100-metre-high cliff and is one of Bulgaria's most famous monuments.
Veliko Tarnovo is home to a reconstructed fortress and well-maintained streets lined with wooden houses. Perhaps walk up Zarevets Hill to enjoy breathtaking views over the town and the numerous monasteries that decorate the picturesque gorges of the Yantra River.

Today we head to the open-air museum of Etara. In all, this museum boasts 50 sites showcasing Bulgarian life at the turn of the 19th century. Stroll around and relive the past as you watch bell-makers, potters and other artisans at work.
Later we'll journey through the spectacular Shipka Pass, which winds through mountainous terrain, on our way to a rose-oil distillery. The damask rose, or Bulgarian rose, has a deep and intense scent, and the country is one of the top producers of rose oil. This highly prized commodity is used to make some of the world's most famous and expensive perfumes - to make just 1kg of oil it takes three tonnes of petals. This is why rose oil is known as 'liquid gold'. You'll see how it is produced on your tour and will even get to sample products including rose water and rose and lavender oil. Next, we'll head to Kazanlak to see a Thracian tomb dating back to the 4th century BC.
Tonight, we're going to head back into Sofia to enjoy dinner and a traditional folklore show. The restaurant we are going to dates back to the 19th century and is located close to Lion's Bridge. An array of delicious Bulgarian specialities will be on the menu, including porcini soup served in a bowl of bread.

Today we'll transfer you to the airport for your return flight to the UK. Upon arrival, either make your own way home or your Travelsphere Private Chauffeur Service will be waiting for the journey home (if you've pre-booked).

Crystal Palace is a 4 star hotel situated in the heart of Sofia and is a 10 minute walk to Cyril and Methodius National Library of Bulgaria, The National gallery for Foreign Art, The Alexander Nevski Catherdral. Russian Church and Vasil Levski Stadium are also within 15 minutes. The hotel features include a restaurant which serves breakfast, lunch and dinner and also serves drinks at the bar (reservations required) with 24-Hour room service. other features include a fitness center, bar/lounge. complimentary WiFi in public areas, sauna. 24-hour Business center and massage treatment rooms. The room amenities include bathrobes, slippers, WiFi, wired internet, LCD TV with cable channel, 24 - hour room service, minibar, and hair dryers.
Next accommodation

Landmark Creek hotel is the newest four-star hotel complex in Plovdiv. Located in the greenest and most picturesque city area- the Rowing channel park, the hotel offers an exquisite combination of nature’s tranquility and dynamic city environment. Facilities include a restaurant, a bar, spa and fitness center and an outdoor pool. Rooms have minibar, electric mug, air-conditioning, safety box, satellite TV and free Wi-fi.
Next accommodation

Golden Tulip Varna is a classic 4 star hotel, located downtown Varna City, only 300 m from the symbol of the city – the Cathedral “Assumption of the Holy Virgin”. The hotel features a restaurant and a bar and all rooms have streamlined décor and offer free Wi-Fi and flat-screen TVs.
Next accommodation

Crystal Palace is a 4 star hotel situated in the heart of Sofia and is a 10 minute walk to Cyril and Methodius National Library of Bulgaria, The National gallery for Foreign Art, The Alexander Nevski Catherdral. Russian Church and Vasil Levski Stadium are also within 15 minutes. The hotel features include a restaurant which serves breakfast, lunch and dinner and also serves drinks at the bar (reservations required) with 24-Hour room service. other features include a fitness center, bar/lounge. complimentary WiFi in public areas, sauna. 24-hour Business center and massage treatment rooms. The room amenities include bathrobes, slippers, WiFi, wired internet, LCD TV with cable channel, 24 - hour room service, minibar, and hair dryers.

Experience even more of your destination by adding one or more optional experiences to your holiday before you set off. Take a look below at the extra trips you can enjoy on this tour 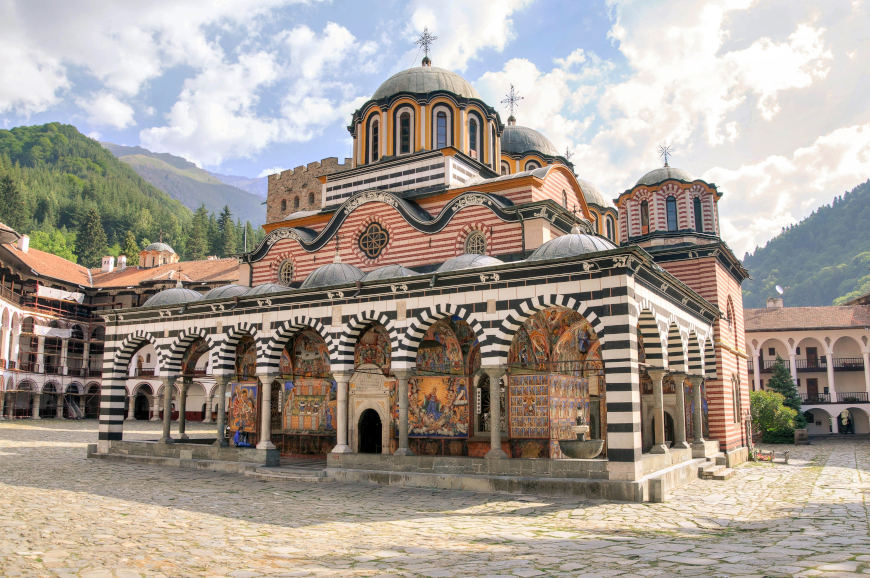 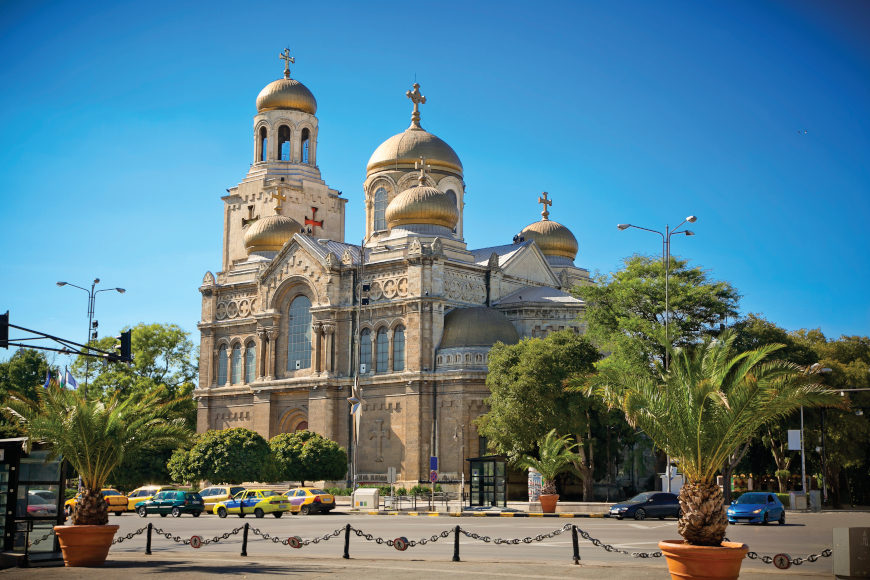 Varna - Varna and its Archaeological Museum

Prices shown are based on twin occupancy of a double or twin bedded room with private facilities unless otherwise stated. Single occupancy supplements will apply. Travelsphere have made every effort to ensure the accuracy of the hotel images provided on this website and images of room types displayed may vary to those offered on your tour. Therefore due to the possibility of inadvertent errors we do not guarantee their accuracy. Accommodation, airlines used and flight times are subject to change and will be confirmed in your final documents.