You haven’t truly experienced autumn until you’ve experienced a New England autumn. Time your visit just right and you won’t know what’s more dazzling – the colours or the history…

In November 1620, after 66 long days at sea, the Mayflower landed on the shores of Cape Cod in present-day Massachusetts. And the rest, as they say, is history. Standing on the shores of Cape Cod today, breathing in the salty sea air and gazing across the rolling sand dunes, you can take in a landscape not too different from the one the first European pilgrims saw as they stood on Plymouth Rock. The quaint seaside towns, white churches and historic lighthouses are, however, more recent additions. Nowadays, your time in this genteel setting might be filled with paddling in the pond- calm waters, whale-watching, or soaking up some culture in America’s oldest active art colony in Provincetown.

From Maine’s seaport town of Kennebunkport (settled in the 1600s and best known for ship-building and gloriously opulent mansions) to Portland Head Light (Maine’s oldest lighthouse at 230 years old), New England’s present and past are all mixed up. And nowhere is this clearer than in Salem, New Hampshire. On a crisp autumn day, you’ll find Salem at its loveliest, its colourful wooden houses and historic wharves offering a window to the past. But we all know Salem is famous for something much darker than its architecture. This was the site of the notorious witch trials of 1692, where over 200 innocent lives were lost. Today, in celebration of freedom, witches rule the roost and the town is a cauldron of all things spooky. October is when Salem truly erupts into life (or should that be after-life?), when the country’s largest, month-long Halloween festival comes to town. 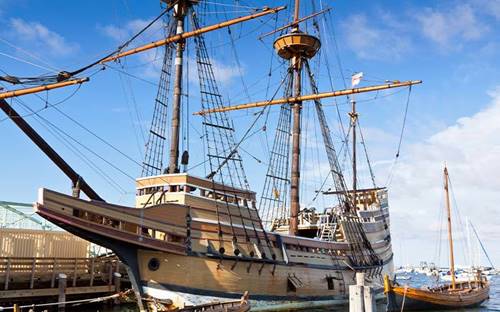 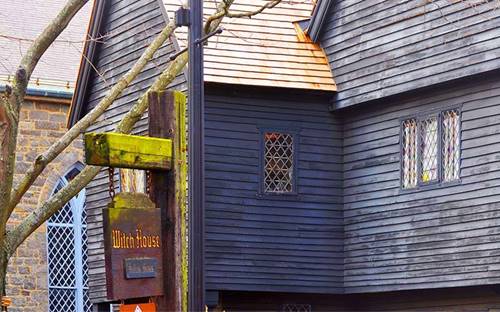 History is everywhere you turn in New England. The states of Maine, Vermont, New Hampshire, Massachusetts, Connecticut and Rhode Island sat at the very heart of the country’s colonial past. You only have to walk Boston’s Freedom Trail – past the churches, meeting houses, and battlegrounds which tell the story of the American Revolution – to understand its critical role in the nation’s founding. These days, Boston is famously forward-thinking. There’s far more to hold your interest here than the quaint cobbled streets and historic icons – although those features are certainly charming. Discover dynamic contemporary art, music and theatre scenes, picturesque parks and river walks, a buzzing student energy (Harvard University is just across the water in Cambridge) and sports events galore. Doing as the Bostonians do and letting loose as you cheer on the Red Sox or Patriots is a must!

Arriving in November, those first Europeans that stepped off the Mayflower would have been bowled over by a blaze of fiery reds, oranges, purples and browns. And that same spectacle still draws people to New England from all over the planet. From the urban parks in Boston, Newport and Providence to the wilds of the state parks, you’re in for a real visual treat here. The carnival of colours is nothing short of dazzling. Head out to Rhode Island to witness the apple orchards dripping with juicy red jewels and see the harvest underway at centuries-old farms. We’d be hard pushed to single any one place out as the home of New England’s best autumn foliage, but New Hampshire’s White Mountains are strong contenders. Drive along the scenic Kancamagus Highway, through the hillsides and valleys blanketed in flaming red maple leaves, and on into Franconia Notch State Park to witness the seasonal extravaganza at its most flamboyant. Even on the windswept Atlantic shores of Maine, Acadia National Park undergoes its own transformation. As the temperatures cool, vivid emerald hues turn to shimmering golds. The first national park in the east of the country, Acadia is a maze of granite cliffs, deep tide pools and windswept islets. Rugged and untamed, it’s an itinerary essential if you’re a wildlife lover. You might spot whales, seals and peregrine falcons here – and after a long day of nature-watching, you can kick back and relax with a cup of tea in a pretty historic town like Bar Harbor, which dates back to the early 1600s.

Four centuries on from the sailing of the Mayflower, it’s no surprise that New England is very different. It really is a whole New World. But when autumn arrives in this eastern corner of the United States, the temperatures still begin to fall, the leaves still begin to turn, and nature does the same dance it’s done for thousands of years. We recommend booking yourself a front-row seat.