Searching for whales in Hermanus

Travelsphere team member, Nicola, tells us about her visit to Hermanus in South Africa, the whale-watching capital of the world.

“We arrived in Hermanus to the excitement of seeing a large, wild baboon sitting on the wall of our hotel! It watched us pull into the car park, then bounded off up the street, no doubt in search of some food!

After settling into our lovely room, we decided there was no time to waste and headed out to explore. This was, after all, the so-called whale-watching capital of the world. It was a windy afternoon and rain was forecast, but we put on our coats and set off for a walk along the cliff path. Even on a stormy day, the scenery was sublime. Turquoise blue waves crashed onto pristine beaches and there was hardly a soul in sight. Yet I couldn’t help feeling a little disappointed, there were no whales in sight either and I was beginning to wonder whether we had been taken in by the hype surrounding this small coastal town. Still, no matter, it was a nice little place and after stopping for a glass of exquisite South African sauvignon blanc, and quite possibly the biggest scone I had ever seen, all was well, and we were happy to be here.

Next morning, the wind had dropped and the sun was shining bright. After a leisurely breakfast, we headed back to the harbour, hoping our luck may have changed. As we approached, we could see a handful of people peering over the harbour wall and headed over to join them. And there they were, three majestic southern right whales frolicking in the bay, perfectly visible with the naked eye, it was a breathtaking sight. The Hermanus whale crier was nearby, blowing a horn to alert people that whales had been spotted, and we approached him to ask a few questions. He pointed out at least another four whales in the bay. They were a little further out, but still easy enough to spot – even easier with binoculars. Not wanting to miss a second, we crossed the road and bought coffees to go, found a bench and sat looking out at the bay, mesmerised by the amazing scenes that were unfolding. 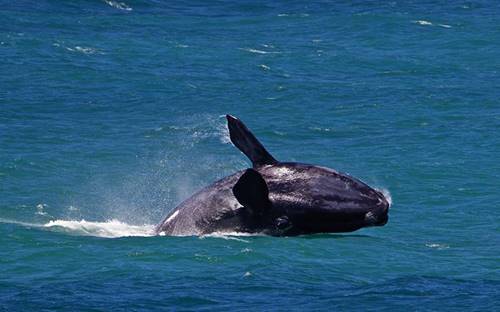 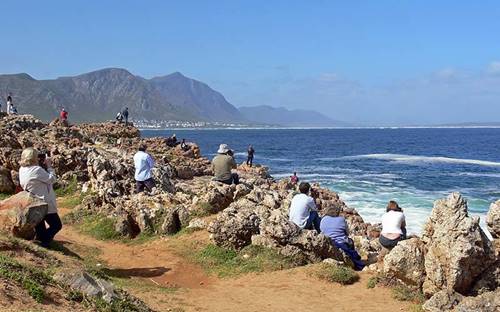 It was some time before we moved on, but this time as we walked along the cliff path we were not disappointed. Whales could be seen all along the coast, some close to the shore, others a little further out. Our walk took us to beautiful Grotto Beach and a fabulous little beach bar. With mountains behind us and the ocean in front, this really was nature at its finest.

During our stay, we also went on a boat trip and wow, what views we had. At one point the boat was surrounded, with two whales on one side and three on the other. It was truly amazing, although capturing the perfect photograph proved a little more difficult – at least it did for me anyway! My favourite moment was when the captain turned off the engine leaving the boat to bob about silently on the waves. I will never forget the sound of the whales gently expelling water through their blowholes.

And that was it, our short stay in beautiful Hermanus was over. Did it live up to expectations? Yes, absolutely. Would I recommend a visit here during whale-watching season, yes most definitely, but of course, you must go with an open mind and remember that whale sightings are never guaranteed.

Our trip to South Africa was full of incredible highlights, but whale watching in Hermanus was up there as one of the best.”