This tour is perfect for travellers who want to discover the splendours of New England visiting all six states. 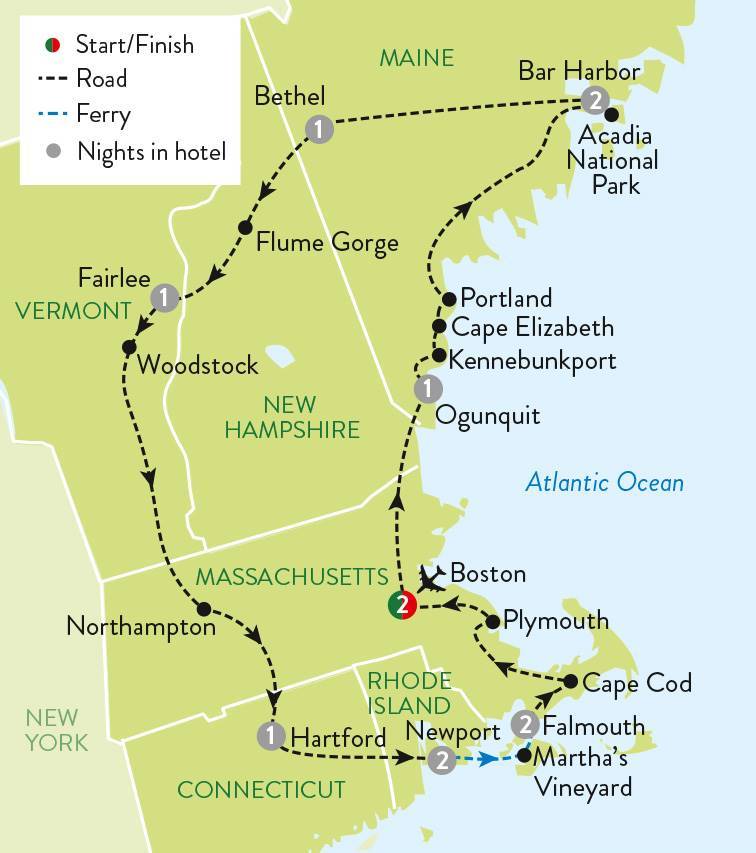 Travelsphere’s Private Chauffeur door-to-door airport transfer collects you from home for your flight to Boston today. On arrival we'll transfer you to your hotel in the newly developed Seaport District.

You'll see many of Boston's highlights on a sightseeing tour this morning. We'll travel along the famous Freedom Trail and visit Beacon Hill, Quincy Market and Cambridge, home of Harvard University. Later we'll head to Ogunquit, a charming beach town in southern Maine, where you'll find quaint shops and lively restaurants. Whilst you're here, be sure to take a walk along the Marginal Way footpath for fabulous views of the New England coast.​

First settled in the 1600s, the seaport of Kennebunkport was known for its shipbuilding, and today you'll see some of the town's mansions, built by wealthy captains. Later we'll visit Cape Elizabeth and you'll see Portland Head Light – Maine's oldest lighthouse. Enjoy some time to explore the waterfront of Portland before our journey continues to Bar Harbor.​

On today's visit to Acadia National Park you'll see an incredible natural landscape of mountains and marshland, forest and rocky coast. The area is home to a variety of wildlife, so be sure to keep a lookout for whales, seals, peregrine falcons and more. Later spend some free time exploring the village of Bar Harbor. This evening we'll get together and enjoy a traditional New England lobster clambake, a dish handed down by Native Americans.

This morning you'll have further time to explore the rocky coast of Bar Harbor, or simply relax in one of the many cafes and maybe enjoy a Maine blueberry soda or a 'Maple Leaf' latte. Alternatively, join our optional excursion, a narrated cruise aboard the LuLu Lobster boat, and see how the crew haul the lobster traps. Later we'll drive to Bethel.​

You'll see glorious New Hampshire countryside today, as we travel through the White Mountains and along the Kancamagus Scenic Byway into Franconia Notch State Park. We'll make a stop at Flume Gorge, a natural granite valley where you can walk along an 800ft boardwalk with walls towering on either side. Our journey continues as we drive into Vermont and arrive at the town of Fairlee.

Your day begins with a visit to the quintessential New England Town of Woodstock. After time to explore the boutiques and galleries, we'll head into Massachusetts and stop for lunch in Northampton, a charming town nestled in the foothills of the Berkshires. Later we'll make our way to Hartford, Connecticut's state capital.

Today you'll visit the house where Mark Twain lived with his family and wrote his most important works. Then we'll continue on our way to Newport, Rhode Island.​

On today's tour of Newport, you'll see the church where John F Kennedy married Jacqueline Bouvier and stroll through the narrow streets of the Old Town. You'll also see some of the summer homes built by America's wealthiest families in the late 19th century. We'll admire Rosecliff, where 'The Great Gatsby' and 'High Society' were filmed.

If you wish to, you can join a visit to The Breakers, the most ostentatious mansion of them all. It was built by the Vanderbilt family and is a 70-room Italian Renaissance-style palazzo. Later you'll have some free time to explore Brick Marketplace and the waterfront.​

You'll take a ferry to Martha's Vineyard this morning. This delightful island is where celebrities and presidents, past and present, choose to take their holidays. We'll take a tour of the island's six small towns, which include elegant Edgartown and Oak Bluffs, with its colourful gingerbread cottages. We'll then continue to Falmouth.

​Today we will travel along the beautiful Cape Cod National Seashore, and stop at Chatham, one of the Cape's most beautiful towns and home to the Chatham Light. Later, we'll make our way to Provincetown, where you'll find beautiful beaches, charming shops and an eclectic artisan community. Why not have lunch in one of the many tempting cafés here?

This morning, we visit Plymouth 'America's Hometown' where you will visit the Plimoth Plantation - a living history museum that includes a re-created 17th century village and Wampanoag Indian Campsite. As we head back to Boston, we'll visit the John F Kennedy Library and Museum, which traces the life of JFK through film and a vast collection of his belongings.

Enjoy a final morning at leisure In Boston before we transfer you to the airport for your flight back to the UK.

You'll arrive back in the UK today. Upon arrival, your Travelsphere Executive car and Chauffeur will be waiting for the journey home.

Only a short walk from Ogunquit's town center, this resort is a 15-minute walk from Ogunquit Beach. Rooms and suites feature free WiFi, TVs and air-conditioning. Amenities include a gym, a day spa, an indoor pool and a whirlpool, plus a seasonal outdoor pool and hot tub. Meals are available in a classic New England-style pub with a fireplace.
Next accommodation

The Atlantic Oceanside is located within 12 acres and on the oceanfront with stunning coastal views, a short distance from Acadia National Park and the historic downtown of Bar Harbor. At the hotel there are indoor and outdoor pools, as well as 'The Bistro' offering local and international dishes, a full bar and deck seating.
Next accommodation

Formal rooms with classic Vermont-style decor offer complimentary WiFi, and satellite TV, while some add balconies and fridges. A lakeside restaurant serves American cuisine, and there's a bar with live entertainment. Other amenities include a billiard room, indoor pool, tennis courts and a movie theatre.
Next accommodation

All rooms in this modern hotel offer traditional décor, flat-screen TVs with premium cable channels, microwaves, minifridges and free Wi-Fi. Other hotel facilities include a casual restaurant, fitness centre, an indoor pool and a whirlpool tub.
Next accommodation

Set in spacious gardens in the heart of Falmouth with restaurants, shops and other attractions of the town are all within walking distance. Facilities at the Shoreway Acres Inn include a breakfast only restaurant, indoor and outdoor swimming pools, sauna and complimentary Wi-Fi. Guest rooms have private facilities, air-conditioning, hairdryer, telephone, TV, iron, refrigerator and tea/coffee making facilities
Next accommodation