​​This exploration of Texas and the Deep South takes you from space flight to Sazeracs, from cowboys to Cajun cuisine. Visit glamorous Dallas and cool Austin, watch as the wild west is brought to life and channel your inner cowboy (or cowgirl) on a cattle ranch. Delve into the Deep South with its incredible cuisine and iconic music scene. From watching an authentic cattle drive to seeing NASA's Mission Control, this tour is full of unique moments you'll remember forever.​ 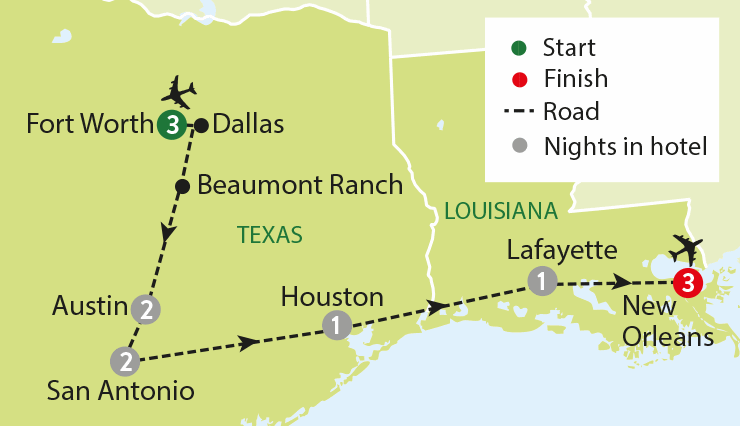 Today you'll arrive in the Texan city of Fort Worth and transfer to your hotel, where you'll meet your companions in the evening for a welcome drink.​

This morning we'll make our way to the classic American city of Dallas. Our tour of the city includes a trip to the Sixth Floor Museum, which is dedicated to the story of John F Kennedy and 1960s America. In the afternoon, we'll tour Southfork Ranch, a working ranch and the filming location for the long-running US soap Dallas.​

Today we'll get a taste of the Wild West at the Fort Worth Stockyards. The historic stockyards were at the centre of America's cattle industry in the late 1800s and at one point sold a million cattle per year. Today, they bring the Wild West to life with an authentic cattle drive every day. We'll watch the drive and chat to the drovers before taking a private walking tour of the stockyards. And don't worry – we'll wait while you buy those cowboy boots.​​

No visit to cowboy country would be complete without a trip to a cattle ranch. This morning we'll visit Beaumont Ranch to see what happens on a working ranch. You'll get to meet the owner's herds of Texan Longhorn cattle, as well as the horses and llamas! Get your camera ready because our lunch will be prepared on a traditional chuckwagon – the wagon used by cowboys for cooking during long cattle drives. Then it's full steam ahead to Austin.​

Deemed 'Live Music Capital of the World' and famous for (of all things) its sizeable bat colony, Austin is Texas's cool, off-beat capital. We'll tour the city's landmarks, including the Texas Capitol building, Texas University and the 360 bridge, and go behind the scenes at Austin City Limits (ACL Live), a long-running, iconic television show recorded in Austin that showcases new musicians. The rest of the day is yours to get to know this extraordinary city. ​

Today we'll visit Fredericksburg, a classic American small town and an excellent place for shopping and art. Fredericksburg was colonised by the Germans in 1846, and German influences are still present in the town's architecture and cuisine – from schnitzels to German pretzels. Fredericksburg is right in the centre of Texas Wine Country, so in the afternoon we'll visit one of the 50 or so wineries in the area for a tour and tasting. Then, it's onwards to San Antonio.​

Vibrant, culturally diverse San Antonio is the oldest city in Texas, with five Spanish missions that are now a UNESCO World Heritage site. We'll visit some of the city's landmarks including the Alamo, the mission at the centre of a historic battle of the Texan Revolution. We'll stop at the colourful Market Square, home to the largest Mexican market in the United States. The afternoon is free for you to spend as you wish, so why not cruise down the Rio San Antonio or stroll along the Riverwalk?​

Today we'll travel to Houston and the Johnson Space Center for a thrilling behind-the-scenes look at space exploration. See the astronauts' training facilities and the Mission Control Center from where the Gemini and Apollo missions were led. This is also the only place in the world where visitors can not only see, but also step inside, a full-scale replica shuttle.​

​Next stop is the city of Lafayette in the heart of America’s Deep South. Home of the Acadian refugees, Lafayette is considered the centre of Cajun life in the US. We’ll visit Vermilionville, a village of recreated and restored buildings from the 18th and 19th centuries that brings Acadian and Cajun history to life. The rest of the day is free, so you’ll have plenty of time to visit a museum or hunt down some seafood gumbo. Or join us in the evening for a night of Cajun cuisine and dance.

​We'll take a trip through rural Louisiana to Avery Island, a quirky place that isn't an island at all, but a vast dome of salt. Famous as the home of the Tabasco Pepper Sauce factory, the island also houses exotic plants which were introduced by the Avery family who settled there. We'll take a factory tour to learn about the history and manufacturing process of the famous condiment. Later, on our way to New Orleans, we'll stop for a tour of Houmas House, a classic plantation house with 38 acres of lush gardens.

Birthplace of jazz and home to wonderful Cajun and Creole food, New Orleans is one of America's most-loved destinations. Today we'll take a tour of the city's landmarks. You'll then have the rest of the day to see this flamboyant city on your own.​

New Orleans is in 'Bayou Country', named after the low-lying wildlife-rich 'bayous' or wetlands which surround it. Join us on an optional cruise of this watery landscape and look for one of its most famous inhabitants, the American Alligator. Or simply spend the day doing whatever you fancy, whether that's more sightseeing or just a day of relaxing, Sazerac in hand.​

Today you'll transfer to the airport for your flight back to the UK.​

You'll arrive back in the UK today.​

Courtyard by Marriott Fort Worth Downtown

The Holiday Inn Austin-Town Lake is a modern hotel situated a 5 minute drive away from Austin city centre. There is a free local shuttle service if guests wish to explore the surrounding area. Each room is furnished with flat-screen TV’s, microwave, mini-fridge and high-pressure showerheads in the bathrooms. Free Wi-Fi is also available.
Next accommodation

The Hampton Inn San Antonio Riverwalk is situated a few blocks from the Riverwalk, the Convention Centre and the Alamo. The classic rooms include flat-screen TV’s and coffeemakers as well as free WiFi. There is a seasonal outdoor pool and indoor fitness centre for guests to use.
Next accommodation

At the Doubletree by Hilton Hotel, Lafayette you will experience authentic southern hospitality, located minutes from downtown. Rooms are furnished with rich mahogany furniture and complimentary wifi, other facilities include 24 hour fitness centre, outdoor pool, bar and restaurant.
Next accommodation

The Sheraton New Orleans Hotel is a contemporary hotel located near to the French Quarter. Hotel amenities include a bistro which serves New Orleans inspired cuisine, a bar, fitness centre and roof top pool.