​The iconic Serengeti National Park is the star of this safari holiday before Tanzania's equally thrilling highlights. 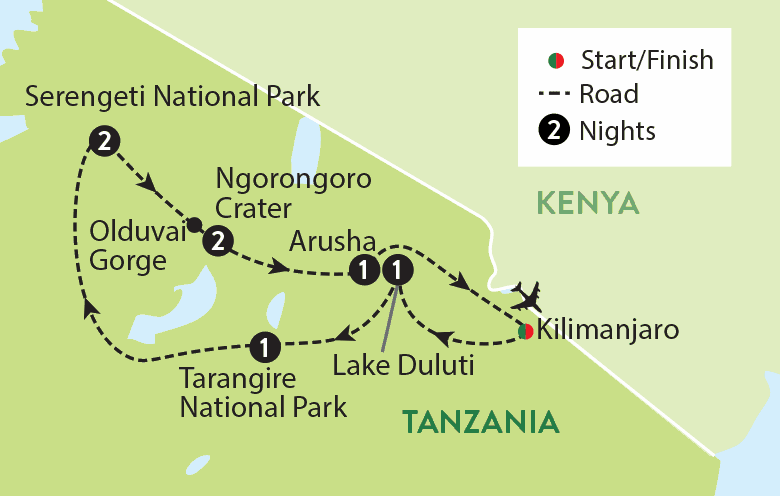 Travelsphere’s Private Chauffeur door-to-door airport transfer collects you from home for your overnight flight to Tanzania, via Nairobi today.

On arrival in Arusha, the capital of Tanzania's Arusha Region, you will be met by your Local Guide and transferred to your hotel. Your overnight accommodation is beautifully located on the shores of Lake Duluti, and offers an idyllically peaceful setting away from the hustle and bustle of the city. After lunch, spend the afternoon at leisure – the landscaped gardens of this former coffee plantation offer exceptional views.

You're going to spend the morning travelling by road to Tarangire National Park. En route to your next lodge, the thrills begin straight away with a game drive. Look for the 'Big Five' – elephant, lion, rhino, leopard and Cape buffalo – as well as a host of other animals, which come to drink at the Tarangire River.
You'll arrive at the lodge in time for lunch, and after time to relax, we're off on a late-afternoon game drive. The park is noted for its imposing baobab and acacia trees, and boasts a rich diversity of birdlife.​

Serengeti National Park is famous for the annual Great Migration, when more than a million wildebeest and zebra make the hazardous journey here from the Masai Mara. A long but very rewarding drive brings you to this iconic game reserve – Tanzania's oldest – which offers some of the best wildlife viewing in Africa.
Settle in at your lodge, then spend the rest of the day relaxing and taking in the spectacular views over the park.​

A fantastic day lies ahead as you head off on safari in the Serengeti, which includes a picnic lunch. Your 4x4 vehicle offers excellent viewing conditions, and it won't be long before you make your first sighting. The park is home to three species of big cat, so look for lions, cheetahs and leopards as they stalk the vast grasslands in search of prey. You'll also see huge herds of buffalo, groups of elephant and giraffe and many species of antelope including eland, topi, impala and Grant's gazelle.​

Today's drive to your next lodge, which is located on the rim of the Ngorongoro Crater, takes you into the Great Rift Valley. During your journey you'll also witness the steep-sided Olduvai Gorge. Archaeological finds here date back millions of years, and include evidence of the world's first humans. If time allows you'll visit a Masai village, where you can see how these semi-Nomadic tribespeople live and have the option to purchase hand-crafted souvenirs.
Formed by the collapse of a huge volcano more than two million years ago, the Ngorongoro Crater was declared a UNESCO-listed site in 1978. It is the largest intact volcanic caldera in the world. The crater floor is now home to a vast array of wild animals, which you will view on your full-day safari tomorrow. For now, simply settle in at your lodge, where facilities include a tempting swimming pool.​

We're going to spend the day on safari in the Ngorongoro Crater, where you are guaranteed sightings of exceptional wildlife. Due to its enclosed nature, the crater has virtually formed its own ecosystem, and is home to huge populations of animals. The Gorigor Swamp is a haven for pods of hippo, and the vast open grassland attracts large herds of zebra, wildebeest, buffalo, Thomson's gazelle, Grant's gazelle and topi. Keep an eye out for black rhino – the area is home to East Africa's best population – and huge numbers of predators such as lions and spotted hyenas. You won't even have to stop your game viewing at lunchtime, as we're going to enjoy a picnic in our vehicle.​

You'll leave your lodge this morning and head back to Arusha for an overnight stay. En route you'll visit Ngorongoro Farm House, built in colonial style on a 500-acre coffee plantation. A guided walk will introduce you to traditional farming methods, and you'll also enjoy lunch here.
This afternoon we're going to call at a local community where you can learn a little about a Travelsphere Cares initiative – Masai Clean Cookstoves. This project teaches local women how to construct and fit stoves in communal buildings. It means they will no longer cook in enclosed spaces using traditional methods, a practice which poses health risks.​

This morning we'll transfer you to the airport for your flight back to the UK, via Nairobi. Upon arrival, your Travelsphere Executive car and Chauffeur will be waiting for the journey home.

The colonial-style Lake Duluti Serena Hotel is located near the shores of Lake Duluti and was once a coffee farm plantation. All rooms feature TV with satellite channels, kettle, free toiletries and a hairdryer. Other hotel facilities include free Wi-Fi, on-site bar and restaurant, library and a gift shop.
Next accommodation

Tarangire Sopa Lodge lies hidden among the ancient baobab and grasses of the Tarangire National Park - home of the greatest concentration of elephants in Africa. All rooms come with en-suite facilities, private lounge on entering with a mini bar and 2 queen size beds with a mosquito net around them. Free Wi-Fi is available throughout the lodge.
Next accommodation

Serengeti Sopa Lodge is located in south-western part of Serengeti National Park, home to many thousands of wild and rare animals. All rooms feature 2 queen size beds and are tastefully furnished with local fabrics and pictures. Additionally there is a verandah with comfortable chairs and coffee table in front of every rooms, where guests can relax in the evenings and enjoy views of vast Serengeti plains.
Next accommodation

Ngorongoro Sopa Lodge is located at the highest point of Ngorongoro crater's entire rim. All rooms come en-suite with spacious showers and feature 2 queen size beds, wake up calls and complimentary coffee and tea to kick start an early morning game drive. Other hotel facilities include an outdoor swimming pool, a barbecue and on-site bar. Free Wi-Fi is available throughout the lodge.
Next accommodation

The Arusha Hotel, conveniently located in the city centre, is the finest place to stay in the city of Arusha in Northern Tanzania. Spacious and air-conditioned rooms come with en-suite facilities and feature flat-screen TVs with satellite channels. Other hotel amenities include a gym and an outdoor swimming pool, surrounded by beautiful gardens.

Guest can enjoy European, Asian and East African cuisine in the Parachichi Restaurant and drinks in the Hatari Bar.