Nepal - The Rooftop of the World

​Journey into the unknown on a remarkable round trip from Kathmandu as you discover the culture and traditions of this mysterious land. Rich in Buddhist symbolism, admire the Boudhanath Stupa, one of the largest in the world, and take a rickshaw ride around Thamel, Nepal's vibrant tourist district. Explore Patan, a city of ornate temples, then head to Chitwan, where its national park shelters a wonderful variety of wildlife, from crocodiles to rhinos. Enjoy spectacular views of the Himalayas, learn to cook Nepali specialities, visit a refugee camp and learn about monastic life and the importance of symbols in this incredible country like no other. 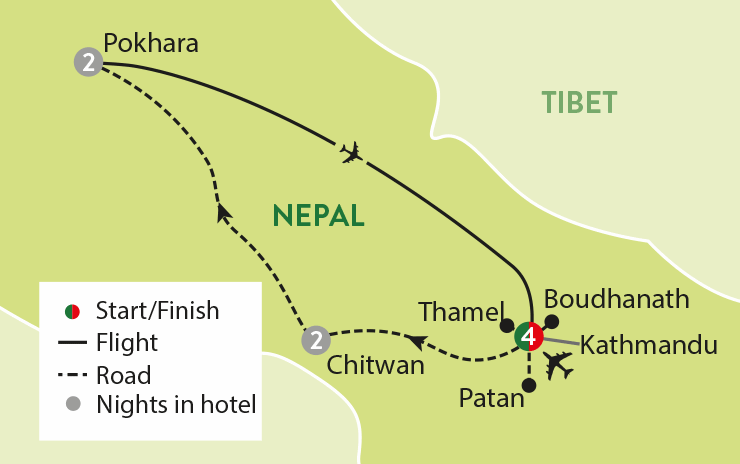 ​On arrival in Kathmandu we'll transfer you to your hotel, your base for the next three nights.​ This evening we head to a nearby restaurant where you'll get to know your travelling companions over dinner.

Today you'll see the incredible UNESCO-listed Boudhanath Stupa, one of the largest Buddhist stupas in the world. This is the centre of Tibetan culture in Kathmandu and is rich in Buddhist symbolism. Thought to have been built in the 14th century after the Mughal invasions, there are many legends surrounding the reason for its construction, and today it remains an important place of pilgrimage. The base of the stupa is made up of three large platforms which symbolise Earth, and here you can admire mountain views and prayer flags fluttering in the breeze while you listen to the chanting of devotees. Be sure to gaze up to the square tower atop the building, which bears the Buddha eyes on all four sides. Instead of a nose, you'll see a question-mark-type symbol, representing unity, and above this, the third eye, symbolising the wisdom of Buddha.
Next we're going to head to the bustling tourist district of Thamel, where you can experience a fun rickshaw ride through its narrow streets, where shops sell everything from pastries to handicrafts.​
This evening you are invited to take part in a Nepalese cookery class, with dumplings, noodle soup and curry likely to be on the menu.​

A day of discovery takes you to Patan, an incredible city boasting dozens of Buddhist and Hindu temples and more than 1,200 monuments. After a tour, we'll have lunch together before we visit Khokhana, a living museum that offers a glimpse of medieval life in a traditional Newari village. There's time to explore this UNESCO-listed site and admire the three-storey temple here.
Later, we've an incredible experience lined up. We're going to take a walking tour through the fascinating alleyways of Patan and then enjoy a traditional Newari feast in a courtyard. We'll be served a wide selection of delicious dishes, watch a dance performance and indulge in a glass or two of raksi, local homemade brandy.

We move on to Chitwan today, where you've an incredible highlight to look forward to, a leisurely guided river canoe ride. As we pass by lush jungle, we're likely to spot wildlife in the water, up in the sky and on the river banks, so keep your eyes peeled. Look out for crocodiles basking in the sun and exotic birds drinking at the water's edge or swooping down to catch a fish.

Another great day is in store for nature-lovers, as we head into Chitwan National Park. Located in the foothills of the Churia mountain range, it is famed for its variety of wildlife, with 68 species of mammal and more than 500 types of bird resident here. It's also renowned for its protection of one-horned rhinoceros, royal Bengal tiger and gharial crocodile, so keep your fingers crossed for sightings as we explore with an expert guide. We're going to revisit the park this evening, when the creatures we see could include elephants, leopards, monkeys, sloth bear and deer.

We arrive in the Pokhara Valley today, a picturesque area which boasts snow-covered peaks, lakes and rivers. Located virtually in the centre of Nepal, it's also perfectly placed for fantastic close-up views of the Himalayas.

A free afternoon gives you a great opportunity to soak up your incredible surroundings.

Together we'll head to Naudanda, which means 'nine hills'. From here we'll take in spectacular views over the Annapurna Mountains, a section of the Himalayas. We'll also have lunch today at a boutique hotel.​ This afternoon you might choose to join our fascinating optional excursion to experience life in a Tibetan refugee camp. You'll meet a family that has settled here, discover the arts and crafts of the Tibetan Plateau, and have the chance to buy handmade jewellery, wood carvings, rugs and other unique souvenirs. We'll then head to the Tashi Palkhiel handicraft centre to learn about local crafts and the importance of symbols and images in daily life. We'll also attend the Pema Tsal Sakya Buddhist School and Monastery, where we'll take part in a pooja – a religious ritual performed by the monks. Our evening comes to an end as we join a local family for a simple meal of Tibetan specialities, including Tsampa – roasted barley flour – butter tea and traditional bread.

Before heading back to bustling Kathmandu, we'll enjoy the peace of Bhadgaon, where, instead of noisy traffic, we may hear the hypnotic chanting of mantras. Also known as Bhaktapur, meaning the 'city of devotees', it is celebrated for its glorious architecture. On a tour, its many pagoda-style temples and red-brick buildings will show us how the entire Kathmandu Valley would have looked in the medieval period. The 55 Windows Palace, built by King Bupatindra Malla and the Nyatapola Temple, which is the highest in Nepal standing on five terraces, are just two highlights. This afternoon you’ll also have the chance to enjoy an optional pottery-making experience.

​You have time to see a little more of Kathmandu at your own pace during a morning at leisure. Later we'll transfer you to the airport for your overnight flight back to the UK.​

​You will arrive back in the UK today​.

​​Please note: During this tour you will travel to altitudes of over 5,500ft. If you suffer from heart or respiratory conditions, or if you have any other concerns, please consult your doctor.

The 4-star Hotel Himalaya is situated in Kathmandu, boasting a 180 degree panoramic view of the Himalayas.

You will stay at the Jungle Villa Resort close to the Chitwan National Park Headquarters and situated by the bank of the Rapti River.

Hotel amenities include a restaurant. Bedrooms have private facilities.
Next accommodation

The Waterfront Resort overlooking the Phewa Lake has incredible lake view from each of its 58 deluxe rooms. Each room with a lake-view balcony is the perfect place to relax and unwind. It provides high-speed Internet access, delightful dining options and an outdoor swimming pool alongside with business and event facilities to handle conferences, meeting and cocktail celebrations. The hotel is only a 10-minute ride from the airport, and just 15-minute walk from the busy tourist hub or 5 minutes taxi ride. There is also free shuttle service into Lakeside provided by hotel at intervals throughout the day.
Next accommodation

The 4-star Hotel Himalaya is situated in Kathmandu, boasting a 180 degree panoramic view of the Himalayas.