This fabulous tour begins with a three-night stay in the Russian capital, Moscow, where a sightseeing tour will introduce you to many of its highlights. During your time in the city, you will also visit the Kremlin, the Museum of Patriotic War of 1812 and the Leo Tolstoy Museum Estate in Khamovniki, one of Russia's oldest literary museums. Next, you'll board a train and head to the country's former capital, St Petersburg. Four nights here give you plenty of time to explore, and a guided tour of the State Hermitage Museum is sure to be a highlight of your visit. You'll also enjoy a tasting at the Russian Vodka Museum and gain an insight into the opulent lives of the Russian aristocracy at the Fabergé Museu​​m. To complete your holiday, there's a trip to the Catherine Palace at Pushkin, where you'll explore the palace and gardens.​ 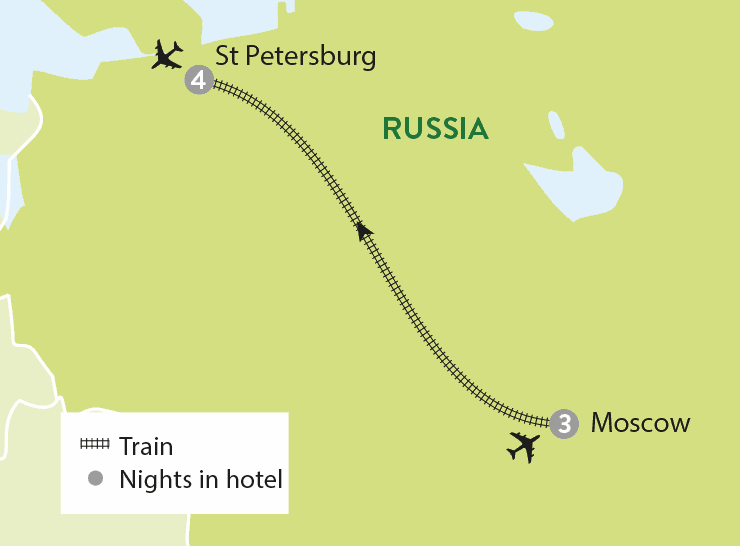 Depart on your flights to Moscow. On arrival we'll transfer you to your hotel in the Russian capital.​

Today you’ll discover the highlights of Moscow on a sightseeing tour. The city boasts some incredible architecture, so be sure to have your camera at the ready. Later, we delve further into the city's history with a visit to The Kremlin. On arrival at this mighty fortress, there’s time to admire its magnificent cathedrals and palaces prior to your tour of the Armoury Museum. The collection here fills nine halls and on display you'll see jewellery, armour, weaponry, imperial clothing and many other treasures.

Today we'll visit The Museum of Patriotic War of 1812, located in the very centre of Moscow, just a few steps away from the Red Square. It is housed in a beautiful 19th century red-brick building, which was originally Moscow's City Hall and then became the State Lenin Museum during the Soviet period. The exhibition contains a fascinating collection of weapons, uniforms, documents and works of art relating to the War of 1812, including rooms dedicated to the Battle of Borodino and Napoleon's retreat from Moscow.
Your explorations continue this afternoon as we head to Khamovniki to visit the Leo Tolstoy Museum Estate, one of Russia's oldest literary museums. The writer lived in this house from 1882 to 1901 and penned many famous works here.​

We're heading to St Petersburg today, which we reach via a four-hour journey on the Sapsan fast train. We'll stay in the city for the next four nights.​

St Petersburg, formerly Leningrad, was the capital of Russia until the October Revolution in 1917. On today’s sightseeing tour we’ll see its palaces, broad avenues and a host of architectural treasures. There's time too to make your own discoveries and explore at your own pace.​
You've the chance to attend a ballet at one of St Petersburg's renowned theatres on an optional excursion, which promises to be an amazing experience.

Today's highlight is the remarkable State Hermitage Museum, where we've arranged a fascinating guided tour. On display is a wonderful showcase of wealth, art and culture with more than three million items in its collection, and we'll see as much as possible.
You're heading to another museum this afternoon, the Russian Vodka Museum, where you will learn all about the country's national drink. After your tour we've arranged a tasting in authentic Russian style, with pancakes and red caviar.​

Today we head to Pushkin to see the Catherine Palace, a Baroque masterpiece named after Peter the Great's wife, Catherine I. As we explore the palace and gardens, you'll get a glimpse of the Russian high life and an understanding of the extravagance of Russia's Imperial rulers.
This afternoon, you'll gain further insight into the opulent lives of the Russian tsars on an included visit to the Fabergé Museum. Inside, you'll see nine of the Imperial Fabergé eggs given by the two last tsars of Russia to their wives and mothers as elaborate Easter gifts.

Today we’ll transfer you to the airport for your flight back to the UK.​