If you're undecided whether to relax or explore on your next holiday, a river cruise holiday is the perfect solution. Relax on deck as a landscape of vineyards, impressive castles and rolling hills glides by, then head right into the heart of vibrant cities and discover the many pretty towns along the great waterways of Europe, each with its own story to tell.

Our European river cruise holidays let you discover everything from fascinating history to awe-inspiring natural wonders. Whichever river cruise holiday you choose, you'll discover a holiday experience that offers so much more - you'll travel from port to port in comfort and style, enjoying five-star food, all-inclusive drinks and excellent service. Each day you can choose to explore each destination at your own pace or tailor your trip with a choice of optional shore excursions.
River cruise holidays are a truly wonderful way to explore – simply sit back, relax and let the world come to you. 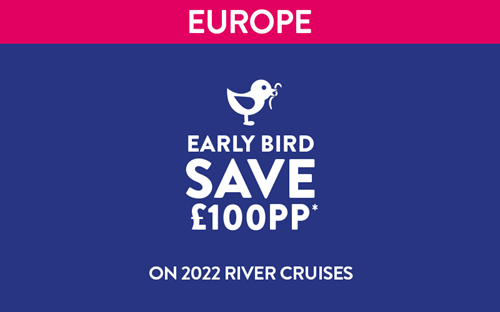 Save on River Cruise Holidays*

To celebrate the launch of our 2022 River Cruise Holidays, you could enjoy Early Bird savings of up to £100 per person* when you book before 28th February 2022. Hurry - there's a limited number of discounted places available! Terms & Conditions apply.

Life on board your cruise ship

Take a look at what you can expect when you enjoy a cruise with Travelsphere on board one of the premium Viva Ships. From all-inclusive meals and drinks, to elegantly furnished cabins to relax at the end of each day. 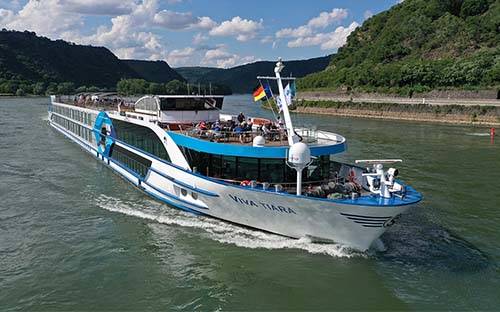 At 1,770 miles, the Danube is Western Europe's largest river - rising in Germany's beautiful Black Forest, it flows east, passing through most of Eastern before finally emptying into the Black Sea via the Danube Delta. A River cruise along the Danube will take you through some of Europe’s most charismatic cities, including the capital cities Vienna, Budapest and Bratislava. The river was made famous by Strauss's waltz and a cruise along here can indeed feel like a dance, as you are lifted by the tide and carried along to one charming destination after another.

Cruise On the Rhine

The mighty Rhine begins its journey high in the Alps, passing beautiful green countryside, fairy-tale castles and charming medieval towns in before emptying into the North Sea at Amsterdam.
The towns and cities of the Netherlands, studded along the shore, are as impressive as the landscapes you’ll pass, and it’s no co-incidence that there is so much to see. Travel along the Rhine and visit destination such as Amsterdam, Rotterdam, Ghent, Antwerp and beyond.

Few settings are as perfect as cruise along the Rhone. From there the river arches westwards to Lyon before turning south into beautiful Provence, seen by many as the country's most laid-back and traditional region. Wine-lovers will be familiar with the next stretch of river, with Cotes du Rhone wines such as Chateauneuf-du-Pape ever-popular on British tables.

Before reaching the Med, the river snakes past Avignon, a charming town of gardens and parks, and Arles, where Vincent Van Gogh painted many of his best-known works here during a fertile 15-month spell in 1888-89. The landscape and the light inspired him, and they are every bit as appealing today.

Cruise along the Seine

The spectacular River Seine flows through much of northern France and serves as an important commercial waterway with ocean-going vessels able to navigate the river as far as Rouen.

A relaxing Seine river cruise holiday will take you through the heart of Paris dividing it in two with the Right and Left Banks and offering views of the Eiffel Tower, Louvre and Notre Dame Cathedral. Visit Rouen, the capital of Normandy, Le Havre and Vernon – a favourite of Claude Monet.

The mighty River Yangtze plays a huge part in Chinese life, with deep roots in the country's culture, history and economy. The river's landscape has changed quite a bit since the building of a controversial dam but a cruise on the river Yangtze will take you to the Three Gorges - calling at Qutang, Wu and Xiling - and considered a truly unforgettable experience. The 500-foot cliffs and cloud-capped mountains look just like images from traditional Chinese art.